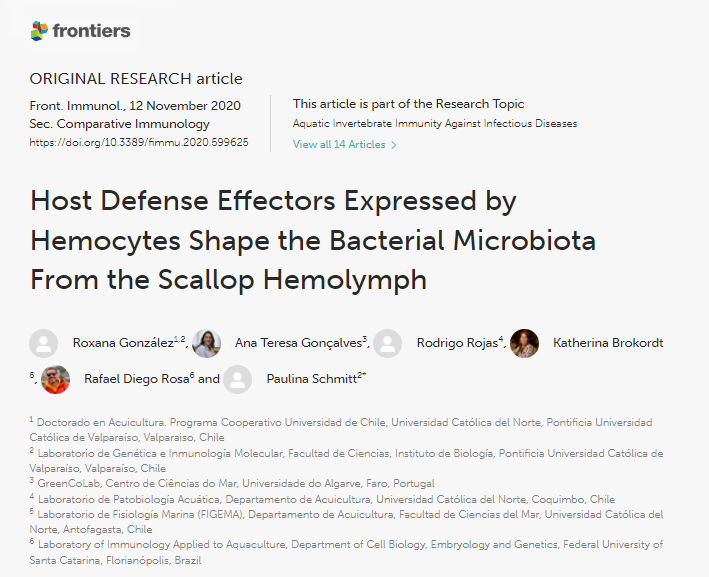 ABSTRACT
The interaction between host immune response and the associated microbiota has recently become a fundamental aspect of vertebrate and invertebrate animal health. This interaction allows the specific association of microbial communities, which participate in a variety of processes in the host including protection against pathogens. Marine aquatic invertebrates such as scallops are also colonized by diverse microbial communities. Scallops remain healthy most of the time, and in general, only a few species are fatally affected on adult stage by viral and bacterial pathogens. Still, high mortalities at larval stages are widely reported and they are associated with pathogenic Vibrio. Thus, to give new insights into the interaction between scallop immune response and its associated microbiota, we assessed the involvement of two host antimicrobial effectors in shaping the abundances of bacterial communities present in the scallop Argopecten purpuratus hemolymph. To do this, we first characterized the microbiota composition in the hemolymph from non-stimulated scallops, finding both common and distinct bacterial communities dominated by the Proteobacteria, Spirochaetes and Bacteroidetes phyla. Next, we identified dynamic shifts of certain bacterial communities in the scallop hemolymph along immune response progression, where host antimicrobial effectors were expressed at basal level and early induced after a bacterial challenge. Finally, the transcript silencing of the antimicrobial peptide big defensin ApBD1 and the bactericidal/permeability-increasing protein ApLBP/BPI1 by RNA interference led to an imbalance of target bacterial groups from scallop hemolymph. Specifically, a significant increase in the class Gammaproteobacteria and the proliferation of Vibrio spp. was observed in scallops silenced for each antimicrobial. Overall, our results strongly suggest that scallop antimicrobial peptides and proteins are implicated in the maintenance of microbial homeostasis and are key molecules in orchestrating host-microbiota interactions. This new evidence depicts the delicate balance that exists between the immune response of A. purpuratus and the hemolymph microbiota.