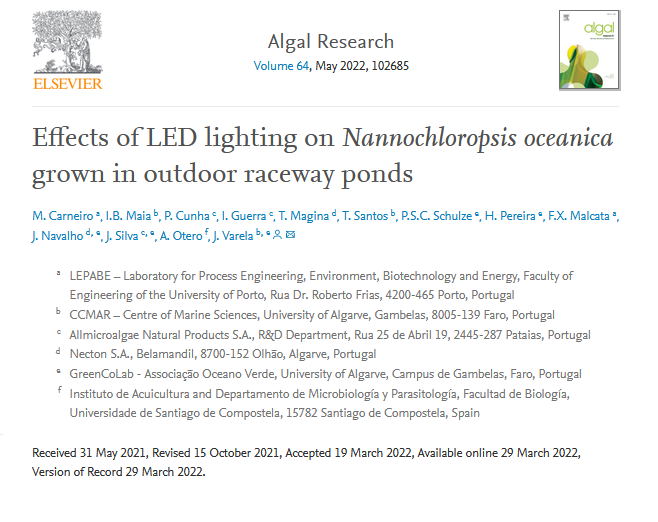 Growth in most microalgal mass cultivation systems is light-limited, particularly in raceway ponds (RWP) where the light path is higher. Artificial lighting can be a promising solution to diminishing dark zones and enhance microalgal productivity. Therefore, our goal was to prevent the cell shift from photosynthesis to a respiration-only stage by resorting to LED illumination. Nannochloropsis oceanica cultures were accordingly grown outdoors in a preliminary small-scaleexperiment, followed by pilot-scale trials. In the former, three 3.0-m2 RWP were set up under three distinct conditions: 1) without LEDs (control); 2) LEDs turned on during the night; and 3) LEDs turned on for 24 h. In the pilot-scale trial, one of two 28.9-m2 pilot-scale RWPs was coupled to the best LED setup – determined in the small-scale preliminary experiment – using the same light intensity (normal mode) and half of the intensity (economy mode), with the second RWP serving as a control. In the preliminary experiment, the use of LEDs for 24 h was deemed as not helpful during daytime, before the culture reached ≈0.5 g DW L−1 – when dark zones appeared during the day due to sunlight attenuation in the 0.1 m-deep cultures. Overall, use of LEDs increased biomass growth chiefly by increasing nighttime productivities – materialized in higher chlorophyll, protein, and carbohydrate productivities in LED-lit cultures. A higher impact of LED lighting was observed under lower sunlight irradiances. A preliminary economic analysis indicates that use of LEDs in RWPs outdoors should be considered for high-value metabolites only.